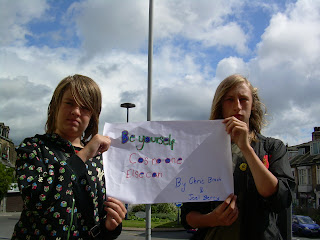 Inspired by this newly reconfirmed right to freedom of speech the young guys came up with some of their own signs. One of which was "Be Yourself, Cos no one else can". I was really impressed with this as often when I work with young people they just want to write their own name or the name of an Xbox game, but these guys said something. It doesn't fit into Wearings classification of signs, nor is it on the scale of FREEE's work but it's there, an honest and confident response to an otherwise appalling day for freedom of expression.
Posted by Rebecca Strain at 11:06